The WFC3 website has been ported from an older unsupported content management system (CMS) to the newer CMS Jahia. This port brings with it a few key changes in the overall look and feel of the website as well as its functionality. Major differences include a new navigation style, predominantly performed by the “hamburger” menu on the top right of the page.  This allows for single point accessing of all HST and JWST pages. A new feature includes the searchability of HST documents such as the WFC3 Instrument Science reports page and STAN pages which searches titles, abstracts, and text for input keywords. Date ranges can be set and keywords can be entered to restrict the scope of search results. Lastly, more dynamic content such as interactive plots and images are now possible with the new CMS.

The deadline for cycle 27 GO program Phase II's is July 25, 2019. We encourage PIs using the WFC3 to read our Phase II Proposal Roadmap for a step by step guide in preparing Phase II proposals.

In particular, programs that are interested in high photometric precision with the IR channel may wish to read a new instrument science report (ISR) by Bajaj et al. (ISR 2019-07). This ISR shows that the photometric repeatability for data with small dithers (<10 pix) is limited to >1.5%, even when then the Poisson noise is much less than 1%.  However, the photometric repeatability can be significantly improved by introducing large dithers (>10 pix), which typically avoids sampling the same pixels for a given source. This reduces the significance of self-persistence and improves the photometric repeatability to ~0.5% (for comparable Poisson noise levels). Therefore, PIs who require high precision IR photometry should consider introducing larger scale dithers. For more information on dither patterns, please refer to Anderson et al. (ISR 2016-14) for dither patterns and Dahlen  et al. (ISR 2010-09) for dithering strategies.

We find that ~3.5% of WFC3/IR pixels have changed their behavior since launch (WFC3 ISR 2019-03). Such behavior changes include a pixel becoming hot or unstable, alternating between multiple stable dark current levels, returning to a normal state after years of instability, and more. Overall, we find no long-term trends in the number of dead or bad-in-zeroth-read pixels, but we observe a linear increase of ~200 hot pixels per cycle and find that the number of unstable pixels can change by up to ~4000 pixels per cycle.

In order to accurately reflect these changes, we generate a new collection of WFC3/IR bad pixel tables and superdarks. Unlike previous releases, these new reference files incorporate a time-dependence which ensures that any changing pixel behaviors are reflected during pipeline bad pixel flagging and dark calibration – a process that can save users thousands of typically discarded pixels to use in their analyses (e.g. pixels previously flagged as bad that have since returned to a normal state). In addition to this time-dependence, these reference files also incorporate several additional years of calibration data since the last time they were created. Because stable hot pixels (DQ value 16) are now well-calibrated during dark correction, users have the option to treat them as good pixels which can reclaim an additional ~0.5% of the detector.

Drizzled data products served by MAST are generated by running AstroDrizzle with a default set of parameter values for each HST instrument. These parameters are defined via a reference file called the 'MDRIZTAB' and will generate high fidelity drizzled products for the majority of programs. Recent tests, based on photometry of dithered star cluster data, suggest that the current parameter settings for the detection and flagging of artifacts (e.g. cosmic rays or unflagged bad pixels) may be too aggressive for the WFC3/IR detector. The previous reference file 'ubi1853pi_mdz.fits' produces drizzled images in which ~20% stars have flagged cores, resulting in magnitude differences which are typically fainter by ~0.10 mag but which may be as large as ~0.5 mag compared to those derived with the flagging algorithm turned off. This effect may be corrected by relaxing the value of the 'driz_cr_scale' parameter, and this change has been incorporated in a new reference file '3562021pi_mdz.fits' which was delivered on May 7th.

Additionally, the algorithm for computing the sky background has been changed from skymethod='localmin', which attempts to bring the background to zero in each frame independently, to skymethod='match', which instead equalizes the background between frames using only pixels which overlap on the sky. Data quality (bit) flag settings have also been updated for compatibility with the new time-dependent IR bad pixel tables and superdarks, such that stable hot pixels are now treated as good data. Drizzled images produced using the improved IR reference files and data quality flags have ~1% lower rms in the sky and more uniform weight (exposure) maps. These new default drizzle settings may not be optimal for every dataset, and users are still encouraged to reprocess their observations with AstroDrizzle in order to refine the combined data products for each unique science program. More details are available in WFC3 ISR 2019-05.

5. Calibration of the WFC3-IR Count-rate Non- linearity, Sub-percent Accuracy for a Factor of a Million in Flux

Previous analyses have shown that WFC3-IR suffers a count-rate dependent non-linearity of about 1% per dex, an order of magnitude smaller than the prior HgCdTe detector, NICMOS, flown on HST, but large enough to potentially limit the accuracy of photometry. In Riess et al. 2019 (WFC3-ISR-2019-01) we present new and more precise measurements of count-rate non-linearity (CRNL) through a combination of comparisons of cluster star photometry between WFC3-IR and WFC3-UVIS and by using observed and synthetic magnitudes of white dwarfs. We further extend the measured range of CRNL to higher count rates by comparing magnitudes between the ground and WFC3-IR for LMC and Milky Way Cepheids. Combining these results with all previous measurements and those from the WFC3 grism provides a consistent and improved characterization of the CRNL of WF3-IR, of 0.75% +/- 0.06% per dex, with no apparent wavelength dependence, measured across 16 astronomical magnitudes. To illustrate the value of the precision reached for the CRNL, we show it is sufficient to compare the photometry of sources along a distance ladder calibrated by Gaia parallaxes and produce a 1% determination of the Hubble constant.

Due to the difficulty of measuring CRNL for WFC3-IR on orbit, a broad set of approaches have been used. The initial, on-orbit calibration of CRNL was produced by Riess (2010) who compared the magnitudes of stars in clusters between two overlapping passbands, one from an instrument without CRNL (the CCDs of ACS WFC) or corrected for CRNL (NICMOS) and WFC3-IR.

In Riess et al. (2019) we present additional sets of measurements which provide greater precision in the on-orbit determination of the WFC3-IR CRNL. First we present new measurements comparing cluster star magnitudes in bands where CCD’s overlap with WFC3-IR, F850LP, and F098M using a combination of deep and shallow frames to extend the dynamic range. We also provide calibrations of the CRNL at brighter magnitudes (F160W=6-14) using comparisons between the ground and WFC3-IR of the photometry of Cepheids in the Large Magenallanic Cloud and the Milky Way. We then use an independent approach where we compare the near-infrared photometry of hot, DA White Dwarf (WD) to models constrained by optical measurements.

We find the CRNL in WFC3-IR to be 0.0077 +/- 0.0008 mag/dex (or 0.0075 +/- 0.006 mag/dex including the grism measurements), characterized over 16 magnitudes with no apparent wavelength dependence and independent corroboration. This result is consistent with the initial determination by Riess (2010) of 0.010 +/- 0.002 mag/dex but the present results are much more precise. This result may be used to correct IR photometry by using the difference in apparent flux (in dex) between where the WFC3-IR zeropoint is set (~12th mag) and the target source (fainter sources appear even fainter and thus are corrected to be brighter). 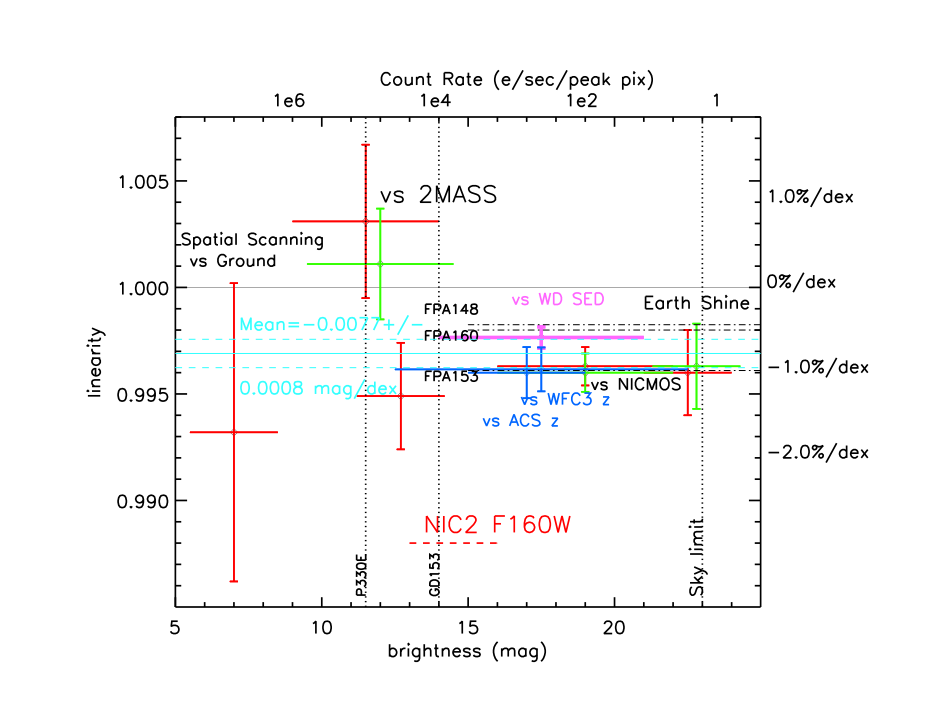 Figure: A summary of the CRNL for WFC3-IR photometry measured over 16 astronomical magnitudes from various sources described in the text.​​​​ 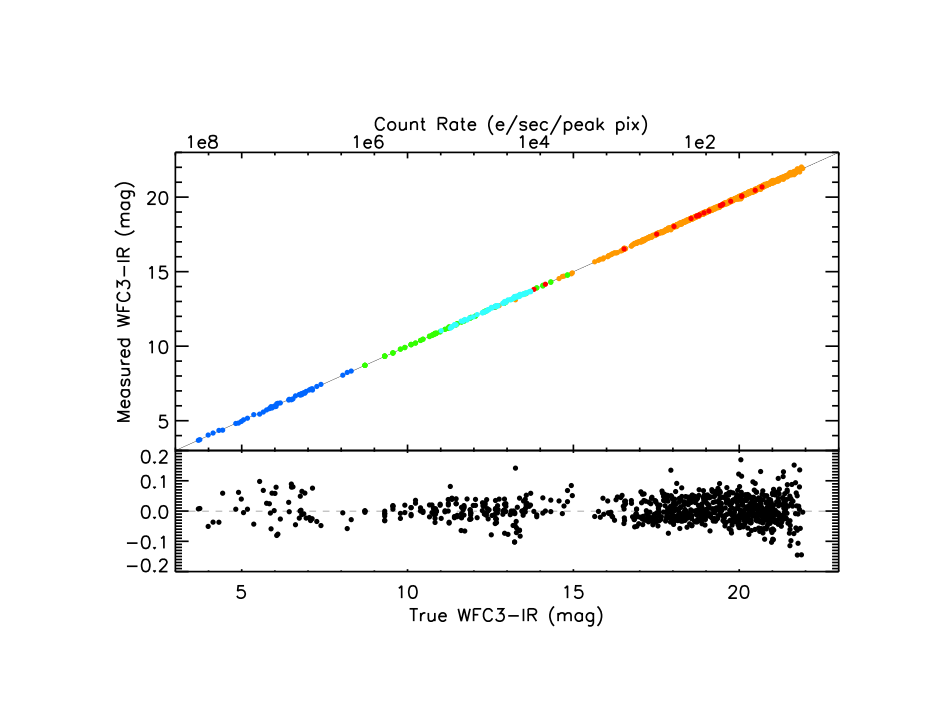 Share in the thrill of space astronomy and join the Space Telescope Science Institute (STScI) team! STScI has openings for Senior Research and Instrument Analysts (RIAs) in our Instruments Division. A PhD degree in astronomy, physics, astrophysics, or related fields is preferred. Substitution of additional relevant education or experience for the stated qualifications will be considered. As a Senior RIA, you will typically work on an instrument team to support the development and operations of one of our flagship missions: the Hubble Space Telescope (HST), the James Webb Space Telescope (JWST), and the Wide-Field InfraRed Survey Telescope (WFIRST). You will be expected to provide support in all phases of instrument calibration, including the collection, reduction, organization, analysis, and interpretation of data (from e.g. spectrographs, cameras, coronagraphs) to optimize the scientific return of our flagship missions. Additional experience with spectroscopy, either from the ground or space telescopes, is a plus. For full details, please see Senior RIA job posting.

To subscribe or unsubscribe to the STAN, send a message to majordomo@stsci.edu with a blank subject line and the following in the body: [un]subscribe wfc3_news

The Space Telescope Science Institute is operated by the Association of Universities for Research in Astronomy, Inc., under NASA contract NAS5-26555.

Please Contact the HST Help Desk with any Questions